If you live in an older home in South Australia you may be able to find out about it by following the tips from the State Library and State Records of South Australia, you don’t need to be a historian to find things out.

You will be surprised by what you can find out about the home you live in.

as well as Tracing the History of a House

State Records has House or Property History which takes you through how to use their Archives Search, the South Australian Integrated Land Information System (SAILIS), Location SA, Maps of the Surveyor General’s Office, 1808-1946, land tax assessment returns and more.

This is the script of the above video which I made this week. There are still photos of the River Torrens and Torrens Lake in Adelaide, South Australia as well as video footage I took at the river as it is today.

Police report to the coroner 11 August 1900.
George Mathews reported to Constable Lucas that his nephew William Hollwell had seen something in the water while working near the weir at Torrens Lake. Mathews took his boat and went to the place and discovered what he thought was the body of a woman. Constable Lucas went with Mathews to the spot and discovered a body of a woman, name unknown, and removed the body. It was lying in about 2 1/2 feet of water about 200 yards from the weir. The body was taken to the morgue at West Tce.

The woman was Mary Hayward. She was 80 years old.

Mary’s daughter Catherine at the inquest said she had last seen her mother, who had been living with her for about 6 months, on Monday 6th August when she left home to get rations. She was not seen for five days. Neither Catherine nor any other members of the family reported Mary missing.

Catherine said she wasn’t anxious because her mother often went away for days at a time. The jury found that Mary died from drowning however there was no evidence to show how she got into the water.

Where was Mary for those 5 days she was missing?

It makes me wonder was there foul play? Did she slip and fall into the river? When did she die? How long had she been in the water for? The coroners reports for this period were pulped during World War 2 so these questions may remain unanswered.

In this day and age we would have so many more answers, my brain keeps asking these questions. What happened to her? Mary Hayward was my great, great grandmother. 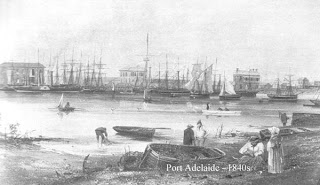 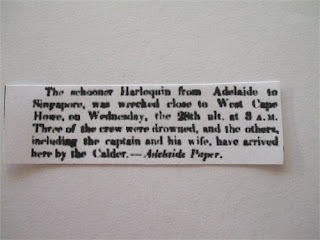 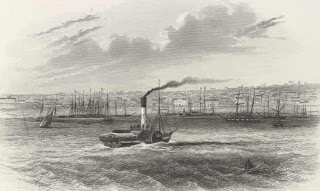 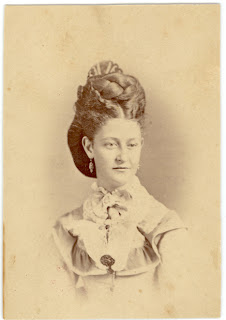 I went to the West Terrace Cemetery this morning looking for the grave of James and Mary Chapman but had no luck finding it.

I was thrilled, though, to find the following plaque commemorating Mary and Robert Thomas.

This is what is says:

Mary and Robert Thomas were among the first South Australian colonists, arriving with their four children aboard the Africaine in November 1836.  Their eldest son, Robert Jnr., had arrived earlier as part of Colonel William Light’s survey team.

Mary was an accomplished writer and poet, having published several poems while in England.  With her husband, she played an important role in documenting and commenting on early colonial life.

Robert Thomas brought the first printing press to the Colony and founded South Australia’s first newspaper, the South Australian Gazette and Colonial Register, Mary was a regular contributor and held an influential position for a woman of the period.

Mary’s diaries and letters provide a detailed account of the ups and downs of early colonial life, the harsh living conditions and ongoing financial struggles.  Through hard times, it was Mary’s commitment to her family astute way with finances that saw them survive.

Like many graves, the memorial which once adorned this site has been lost due to exposure to the elements.

Mary and Robert aren’t ancestors of mine it was just so good to read about a woman’s achievements in early South Australia as well as seeing the plaque where their headstone used to be.

This headstone I saw is being eaten away by the elements, I wonder how long it’s been there for.  You can’t really tell from the photo but it looked like it was melting into the ground.  There is no discernible writing on it at all.  Whatever type of stone it is it’s sad that it didn’t hold onto its information for future generations. 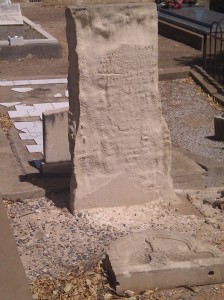 I wonder how long this headstone has been standing.

The cortege coming into the cemetery, thanks to Tanya Saint for this photo

Sunday I went to the Adelaide Cemeteries Authority and Victoriana Society of SA‘s re-enactment, at West Terrace Cemetery Adelaide, of John Luke Monck‘s funeral in 1880.  With a lot of pomp and ceremony the horse drawn hearse made its way up West Terrace and into the cemetery.

I was pleasantly surprised by the size of the crowd, it was a good turn out of several hundred people, even though it threatened to rain.  Thankfully there was only a light shower after the funeral.

The coffin in the grave

The patient horses and their driver

I had mentioned in the Australian Genealogy group on Facebook that I would like to go to this event and so did another Adelaidian, Tanya.  We hadn’t met before but we ended up catching the same bus to the cemetery and chatting as we crossed the road.  It didn’t take long to work out who each other was and we had a great time watching the funeral and talking genealogy!

My 3x great grandfather William Chapman died on the first of January 1897 and had a large funeral cortege.  This re-enactment gave me a bit of an idea of what William’s funeral might have been like.  My next post will be about William Chapman and his funeral.