Since publishing this two part post on Ellen’s life I now have photos of Ellen and her husband James.  I don’t know how old either of them are in these photos or where they were taken.

Ellen had only been married ten years when her husband, Captain James Welsh, became sick.  The newspaper said it was a long and painful illness, to which he succumbed on 22 Nov 1860.

The following years must have been terrible for Ellen on her own with the three children.  Yet in August 1867 she enters into a new phase of her life. Ellen marries John Patten at her home in Rundle Street, Adelaide.  John, a widower, had four children of his own and with Ellen’s three makes seven children. They went on to have another six children together.  So it was a real case of yours, mine and ours wasn’t it.

John was a storekeeper and postmaster in Harrogate, South Australia with his first wife Mary they lived there for approximately six years. 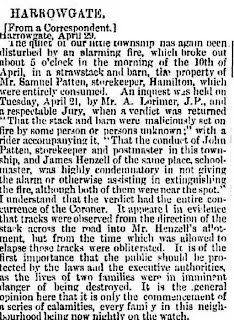 Ellen, John and family must have moved to Woodside shortly after their marriage as this newspaper advertisement in November 1867 is seeking tenants for Harrowgate Store and Post Office. The contact person is John Patten of Woodside.

Ellen and John’s first child, Alfred John Patten, was born in Woodside, South Australia in 1868.  Woodside is a lovely town in the Adelaide Hills now, but how was it for Ellen back then?  She now has a large family and is living in the country instead of the city she’d become accustomed to.

Newspaper records show that John continued as a storekeeper in Woodside.  Alice Patten is born in 1869, and died shortly thereafter in March 1870.

A newspaper record of 14 Dec 1870 shows that there were two storekeepers in Woodside at this time. 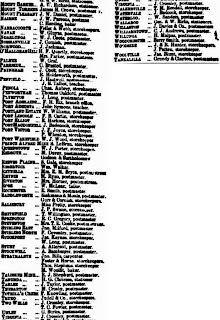 Could this small country community support two stores?
On 4 Feb 1871 “A Serious Accident” is reported in The Advertiser newspaper. John sustains a broken arm and dislocated collar bone while exercising a young horse. 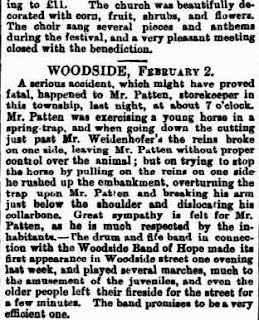 I wonder what the treatments would’ve been back then? John must have been out of action for some time as it is only the following month that he is brought to the position of making assignment to his creditors. The newspaper account said that he had succumbed to the bad times. 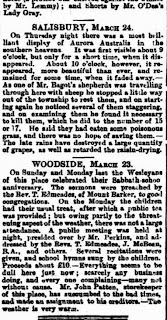 25 Mar 1871 made assignment to creditors

Ellen and John return to Adelaide where next we find the family living in Glen Osmond where John is once again a storekeeper and postmaster.

There are many newspaper references to the Patten’s in Glen Osmond where Ada, Ernest, Percy and Mabel were born. 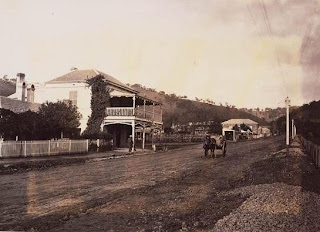 The last record that I’ve found of Ellen and John in South Australia is their daughter Mabel Eva’s birth in 1877. At some time they moved to Western Australia where their son Ernest Edward Patten married Mabel Louise Cargeeg in 1898.

John passed away on 18 July 1902, in Perth, Western Australia and it was some time after that that Ellen moved back to South Australia.

Ellen passed away on 8 April 1908 in Adelaide, South Australia. 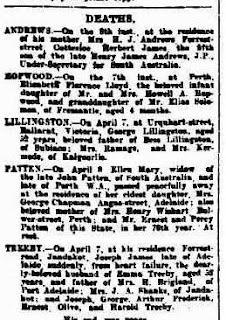