Tracing back through a distant family line I came to this gentleman Eliezer Hainsworth Dodd Snr.  I haven’t found out a lot about his life but what I have found out fascinates me!
He married Emily Pretty on 13 Nov 1854 in Adelaide.  They moved around within South Australia from Adelaide to Encounter Bay to Yankalilla and back to Port Elliot.  Eliezer was declared insolvent in 1856 and his occupation on these documents was listed as Miller. 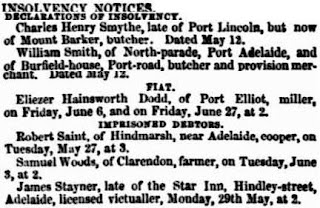 South Australian Register, Friday 16 May 1856, page 4
He went into the Blacksmith business but didn’t fare much better and in 1862 he is declared insolvent once again. 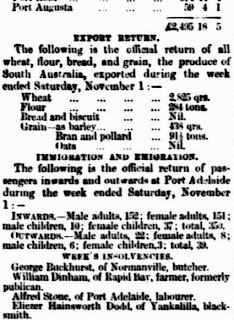 South Australian Register, Friday 7 November 1862, page 2
By this time Eliezer and Emily have had five children although two little ones, William and Samuel have passed away.
Come 1875, during the booming river trade, Eliezer builds the PS Mundoo (Paddle steamer Mundoo) on Mundoo Island near Goolwa, South Australia.

I found this information on Trove the State Library of South Australia has a number of photos of the PS Mundoo also.
Eliezer operated the Mundoo on the Murray and Darling rivers, transporting goods to outlying stations and towns and bringing back wool to be exported to England, until his death in 1900.  More information about Australia’s river trading paddle steamers can be found here http://travelling-australia.info/Infsheets/Rivertrade.html

Barrier Miner, Wednesday 14 February 1900, page 2
This newspaper clipping tells how Eliezer had left Goolwa two or three months earlier with his steamer the Mundoo for Wilcannia but because the river was low they didn’t reach there.  He was about to come home over land when “he had an attack of an old trouble which necessitated his removal to the Wilcannia Hospital, where he died on Feb 8.”
Those who have read Nancy Cato’s book All The Rivers Run will be familiar with this awful scene of a paddle steamer stuck in a billabong when a health crisis strikes.