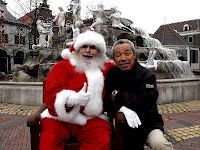 A friend of mine went to Japan to play Santa. Here’s his account of how it went.

I am a professional real-bearded Santa in Adelaide (South Australia) and have just done a Season as Santa at Huis Ten Bosch (locally pronounced as House Ten Bossu), a wonderful theme park in Japan, just an hour or two above Nagasaki on the island of Kyushu. This park has been a labour of love for the builders who have recreated the look and feel of Holland even though they are in Japan! Almost all of the buildings have been faithfully copied from street scenes in the Netherlands, even the streets are cobbled and brick! There are canals and castles, horse drawn carts and cheeses and chocolates and tulips abound.

I got there on the 18th November and started shifts from the 21st through to the 25th. Check out their site at Huis Ten Bosch

There were 5 of us there as the Santa Team: myself, 2 from San Francisco area of the USA and 2 from Holland. The 2 from the States and myself were living in single apartments in Tenjin in the suburbs of Sasebo city. We had to look after ourselves, do our own transport, shopping, cooking, cleaning etc. It was a very interesting time, we all had a ball learning what local language we could and absorbing the culture and local foods. And 2 of us are real bearded Santa’s so we eventually got used to being swamped with squealing girls with photo requests as we walked around the shops and down the streets. “Santa San” is a very big thing to many Japanese people. Honestly it was almost like a minor celebrity would be treated down this way. Amazing!

We worked 6 days out of 7 and almost all of my shifts were in the afternoons and evenings so touring was out except for staying close to the city. I did manage to make an interesting train trip down to Nagasaki and visit the Bomb Museum and stand quietly at the Hypocentre and contemplate.

Thanks Ian for this account of your time in Japan! It sounds like you had a great time learning the language and eating local food as well as doing your Santa duties!