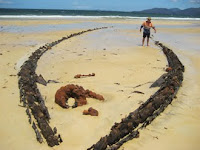 EROSION along the battered Hinchinbrook Island shoreline has revealed a shipwreck holding more than 130 years’ worth of history.

A combination of strong winds, high tides and dangerous storm surges associated with Cyclone Yasi has unearthed an iconic artefact on the largest bay on the island.

The wreck is believed to be the 35m brigantine Belle, which struck ground in Ramsay Bay on January 12, 1880.

Records show the Belle was built in 1865 and was beached during strong winds while loading cedar timber at the secluded location.

The wreck is believed to be one of eight ships that went to ground around the island between 1876 and 1903 and one of three sailing vessels still resting in the bay area. Records show both the Charlotte Andrews and the Harriet Armytage went to ground in Ramsay Bay in 1879, followed by the Belle a year later.

You can read the rest of the article here: Yasi reveals 130-year-old shipwreck | Townsville Bulletin News

I hope that archaeologists are able to preserve this find or at least record it so that the history, the knowledge of it, isn’t lost.