I read this story in my ancestry.com newsletter today and it was so good I thought I’d share it. 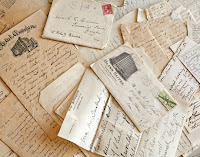 On December 22, 1933, something wonderful and unexplained happened to Felice May. It was the night before her birthday – her 4th — and two days before Christmas, but in the past, neither day had been any different than the other chore-filled days of her Depression-era childhood.
But on that night, Felice’s parents did something they had never done before. In their rickety Model T with its tattered canvas roof, they drove into town, showed Felice the dazzling Christmas lights, and led her to the five-and-dime store, where they offered her a choice of a doll or a wooden pony on a pull-string. She chose the pony. It was likely her only store-bought toy.
It was a night Felice would never forget. But it was also a night that left her with an abiding mystery that lasted through the years: how could her parents have afforded such a gift when they were so down on their luck?

You can read the rest of the story here.