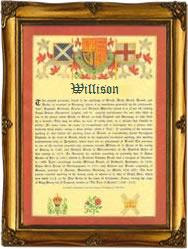 This interesting surname is of Germanic origin, and is a patronymic (son of Will), or pet form of the personal name William, composed of the Germanic elements “wil” meaning will or desire, and “helm”, a helmet or protection. The name was popular with the Normans who introduced it into England at the time of the 1066 Conquest. One Robertus Filius (son of) Willelmi appeared in the Domesday Book of 1086, and the surname was first recorded in the early 14th Century (see below), while Richard Willam was recorded in the 1279 Hundred Rolls of Oxfordshire. The patronymic forms first appeared in the 14th Century; Johannes Willeson and Adam Wylis were recorded in the 1379 Poll Tax Records of Yorkshire. Recordings from London Church Registers include: William Willes, a christening witness at Christchurch, Greyfriars, Newgate, on April 6th 1565, and the marriage of Alexander Willis and Jane Smalwood on October 1st 1598, at St. Dunstan’s, Stepney. An interesting namebearer, recorded in the “Dictionary of National Biography”, was Francis Willis (1718 – 1807), a physician who attended George 111 in his first attack of madness (1788), and who became popular at court. The Coat of Arms most associated with the name is described thus: “Per fess red and silver three lions rampant counterchanged, a border ermine”. The first recorded spelling of the family name is shown to be that of Walter Wilys, which was dated 1327, in the “Poll Tax Rolls of Staffordshire”, during the reign of King Edward 111, known as “The Father of the Navy”, 1327 – 1377. Surnames became necessary when governments introduced personal taxation. In England this was known as Poll Tax. Throughout the centuries, surnames in every country have continued to “develop” often leading to astonishing variants of the original spelling.