Transcript of the above article:

Misfortunes never come singly. The deplorable accident which happened yesterday at the Catherine Reef United mine, Eaglehawk,by which the lives of two miners were suddenly cut off, has been closely followed by another fatal mishap, the scene now being the mine of the Carlisle North Garden Gully and Passby Company, near Long Gully. The victim was a young man, 28 years of age named George Jenkin, who leaves a wife and two children very badly provided for. It appears that during some recent baling operations at the mine the tank, in its passage up and down the shaft, knocked against the skids and injured the timbering. Two of the men employed by the company—the deceased and a miner named Richard Wigley—were on Tuesday night put on to repair the timber-
ing, and to do the work they took off the baling-tank from the eastern compartment of the shaft and put on a bucket in its place, on which they could sit and get more conveniently to their work of fixing the skids. This morning about 4 o’clock the men finished their work, with the exception of putting in one skid. They signalled to be raised to the surface to get the skid they required, but when the bucket had been brought up to about 680ft. from the surface, Jenkin knocked his shoulder against one of the frames of the sets, and losing his hold of the rope fell off the bucket, on the edge of which he and his mate were standing, and was precipitated to the bottom of the shaft, which is 1,340ft. deep, the unfortunate man, therefore falling a depth of 660ft., and
dropping into the well, which contained 23ft. of water. The sudden swaying of the bucket, caused by the jerk, and the removal of Jenkin’s weight from one side, placed Wigley in a very perilous position, for on the one hand he was in danger of being caught in the frame sets, as Jenkin had been, and again the bucket tilted through the weight being all on one side. He was in imminent danger of losing his footing and following his mate. He managed, however, to cling to the rope until he reached the surface, when men were at once sent to the bottom of the shaft to recover Jenkin’s body. It was never hoped that he would reach the surface alive. Grappling irons were sent down, and the well was dragged, but several hours elapsed before the body was raised above water. It was in a dreadfully mangled state, the unfortunate man having no doubt in his fall knocked from side to side against the timbers in the shaft.

The accident appears to have arisen from carelessness. The regulation of Mines Statute provides that men shall not ride on a bucket up or down the shaft without being lashed to the rope attached to the cage. A great many miners object to being lashed to the rope. Jenkin and his mate objected similarly, and although they were furnished with rope for lashing purposes, they did not use it. An inquest will be held tomorrow.

********************
Richard Henry Wigley was my great great grandfather. The mine where he worked is in Bendigo. I went to the place where the mine used to be. There are only a few things left and a plaque now. 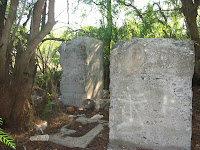 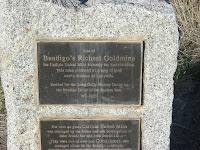