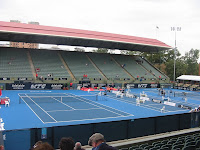 I went to the World Tennis Challenge last night (Tuesday 12 Jan) here in Adelaide. It was terrific! I had a wonderful time. The gates weren’t even open yet and I saw Mark Woodforde. Saw Paul McNamee a couple of times later in the night too. Had a nice tea there and then went to find my seat.

The first match was Bernard Tomic (Australia) versus Robby Ginepri (USA) It was a close game and Bernard won. 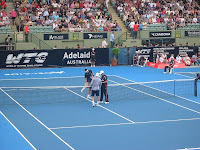 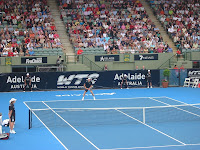 Next Mansour Bahrami (International) played Henri Leconte (Europe) one of my favourite tennis players! They put on a wonderful show for the audience hitting balls whilst talking to the audience, serving 2 balls at once, pretending to fight with the umpire and with John McEnroe (playing on the other court) and other antics and trick shots. Henri won this match. 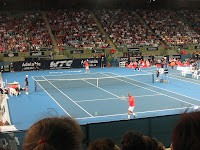 The doubles match was Australia versus USA. Pat Cash and Bernard Tomic against John McEnroe and Robby Ginepri. It was a great game. USA was leading for quite some time and then Australia came back and won it. The McEnroe serve didn’t have quite its old fire but it was still a sight to see! I was amazed at how really skinny he is. Pat Cash is still in good shape but he looked big compared to John. 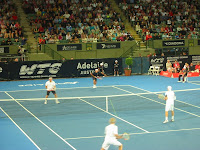 If you look closely at this shot you can see the ball sailing through the air towards John McEnroe.

All the scores and a write up about the evening are here on the World Tennis Challenge website. BTW I thought the grammar in this article was terrible. I know my grammar isn’t great but in an article for the world, to publicise and promote an event which you want people to attend……not good.

There are more tennis and sunset photos in my facebook photo album here. Please stop by and leave me some comments. 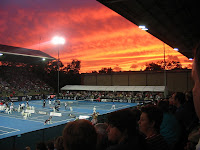