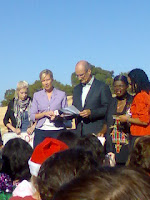 Had a very nice morning at Elder Park in the city centre watching Sunrise the tv show being filmed. I saw Guy Sebastian sing three songs but I only saw Hugh Sheridan sing one. I love Guy and his voice is incredible and I was surprised with Hugh Sheridan because I hadn’t heard him sing and he has a really good voice and did very well live too.

Guy talked to the crowd before and after his songs and said he was loving being back in Adelaide and joked that is was ‘only for a minute’.

The regular Sunrise cast seemed as lovely and natural in real life as they are on air, chatting to the crowd and making time for photos with young and old alike.

I overheard Dorinda Hafner say to her daughter Nuala, I don’t want you to go! I’m blessed that my children still live in South Australia. It must be so much harder for parents whose children live in another state or a different country!! And celebrity parents and children wouldn’t get to see each other much at all. If I remember correctly Nuala hasn’t been back from London all that long either.

I’ll upload my video clips of Guy and Hugh too!