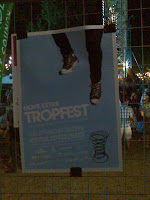 Tropfest
This is one of the reasons I chose to live in Adelaide so that I can attend events like this! www.tropfest.com I enjoyed most of the films that I saw. There were a few which I felt were in bad taste but there were also some which were excellent –

“Be My Brother” raising awareness about disabilities and Down Syndrome especially
“Being Carl Williams” starring Gyton Grantley about how people think of the actor as the character (beware the swearing)
“Notes From A Scaresmith” quite unusual, weird, strange film
“Beyond Words” about a deaf woman and a blind man. He rescues her from an attacker. I wanted this one to win an award.
And I can’t remember the name of the other one it was about a kid and his Dad. The Mum had died and it was about what the dad was getting up to. It had a really good twist at the end. I thought this one might’ve one an award. (I found it it’s called One In A Million)

You can watch the films here ninemsn.com.au